The Inuit Tale of The Skeleton Woman

The Inuit Tale of The Skeleton Woman

Have you ever felt like you lost a part of yourself or find yourself longing for the “old you”?

I believe we have all experienced that feeling. It is a repeating theme throughout time and cultures. It is a natural desire to live as whole and complete versions of ourselves. The story I’m about to share with you holds the keys to living that way.

This story is called the Skeleton Woman. It is an Inuit tale about a woman and her journey of rediscovery:

She was an ordinary woman by all standards. She lived her life just as the rest of us until one day everything changed. After upsetting her father she lost the life she once had. Her father being caught in the haze of fury threw her off of a cliff with a large rock tied around her ankle and she sank to the bottom of the ocean. With the rock heavy on her ankle she was unable to release herself from the burden and she drowned. She lived and died but the story does not end with her death.

For many years her body stayed in the ocean, deteriorating until she was only bone and spirit. Over the years she spent in the ocean she became bitter and angry, feeling her death to be unfair. As her anger and bitterness grew it affected the water around her. Soon the water became so full of her emotions others passing over could feel the weight. The water was cursed and avoided by the villagers. Years came and went and the villagers forgot why they avoided those waters. 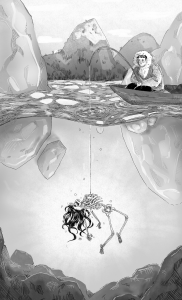 One day a desperate fisherman decided to fish in the cursed area. He came near where her body lay and cast it in his line. His line reached far down into the ocean catching on the woman’s rib cage. Feeling the tug the man began to pull up the skeleton of the woman. He labored over the weight of his catch, excited about the prospect of a large fish to feed many people. Finally he brought the line up and saw the skeleton on the end of his line. Frightened, he threw the skeleton back into the water, unaware that the skeleton was still stuck to his line.

Furiously he rowed back to shore, trying desperately to escape the skeleton nipping at his heels. Making it to the shore he quickly jumped off the boat and ran as fast as he could through the marketplace, dragging the skeleton through the stashes of food. As the skeleton bumped over the food, she reached down and ate some fruit, feeling it flow through her and cause a change. The man continued to run until he reached the relative safety of his home. Sliding down to the back of his home he began to breathe easy in the darkness of his sanctuary, unaware that the woman had followed him into the safety of his home.

The man began to feel the presence of another person and he started a fire for light, only to find the skeleton woman at his feet. Scared at first, he backed away from her afraid of what she might do to him. Slowly he began to see her for what she was. A tangled mess of bones. Taking pity on her he began to straighten out her bones and untwist her until she was once again an orderly skeleton. The man gently laid the woman on the floor near his bedding and curled up to sleep next to her.

As the man began to dream a tear fell from his eye and the skeleton woman used the tear to quench her thirst. She then took his heart and used it to help her own heart find it’s beat and rhythm again. She became rejuvenated and remade from her death. Dawn approached and the man woke to find the skeleton was gone. In its place was a beautiful woman. She moved into a new life with him. Becoming his partner, lover, and wife. Together they lived a long and beautiful life.

What We Can Learn From the Skeleton Woman Story

This story may seem odd or shocking to you as you read it. Allow me to break the story down so you can see what the story wants you to understand. The story itself shows us our/the natural cycle that our healing path has. The story teaches us that we all experience the same pattern for hurt and healing.

The Pattern of Hurt

These 4 steps show us and help us to move forward with our own healing journey. We each go through this cycle and have to work through the hardships to create a new relationship with ourselves. Once we do, love is found and expanded in ourselves. We all need to allow ourselves to go through these processes and embrace the parts of us that need returning.

What part of yourself needs to be recovered? Where do you find yourself in this story?

This story is woven into the theme of our upcoming healing retreat – Call Back Your Power. Continue your healing journey and call back the lost parts of you during our Eclipse Retreat this May. Click here to learn more!

You want to trust yourself – to make good decisions & to feel peace when moving forward.

Our Intuition Connection Guide is the first step in strengthening your connection.